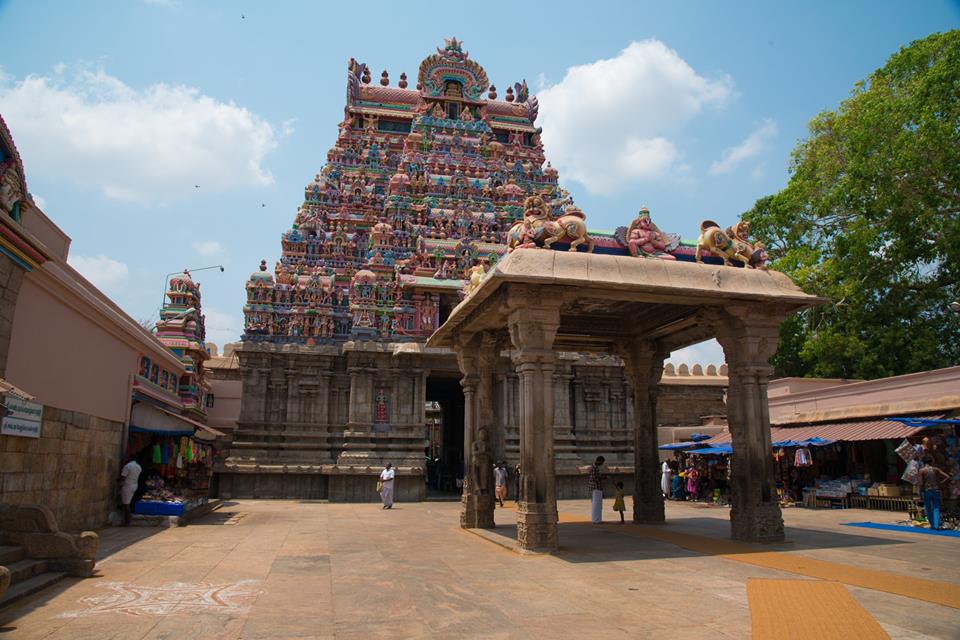 Located at the ancient temple town of Srirangam, Tiruchirappalli, Tamil Nadu, the Sri Rangam temple (also known as Sri Ranganathar Swamy Temple) is the epitome of Dravidian architecture. Each stone of the temple is curved with an artistic skill and recreates a timely experience dating back to an ancient era. Beautiful is an understatement to describe the divine feeling of visiting the Sri Rangam temple. It is located at a distance of 325 KM from Chennai.

A reclining statue of Ranganatha, Sri Vishnu adorns the temple sanctum, also referred to as Nam Perumal and Azahagiya Manavaalan (Tamil word for “our god” and “beautiful groom” respectively) by the locals. The wise Alwars of the ancient era (the poet-saints of Tamilnadu) have praised the temple in their hymns as one of the eight Sawayambu Kshetras of Lord Vishnu.

There is a complex maze of sacred water tanks, pillared hallways, ancient shrines, profound Gopurams (a regal entry to each temple, very prominent part of South Indian temple architecture) that paves a way for the visitors, to a coveted darshan. These walls are adorned with handpainted frescos, taking many references to Hindu mythology and are dated back to the 14th-century cultural prowess of Bhakti Movement. It is not surprising that the temple found an easy mention in the UNESCO’s tentative list of architectural and cultural marvels of the World Heritage Site.

Standing tall on a river islet with mighty Kaveri flowing by both the banks, Sri Ranganathaswamy Temple  showcases the very best of Tamilian culture. The first historical reference of this temple finds a place in Tamil Literature of Sangam era (roughly 4th century AD).

Medieval history found this temple to be falling prey, to Delhi Sultanate’s invasions and plunders, a countless number of times. However, legends suggest the deity was brought back after every war which was made of pure gold.

This temple stood against all the turmoil, beaming with faith and love of the devotees. Till date, worships takes place on a daily basis and demands extensive preparation, rendering it the status of the largest active temple complex in the world, with approximately an area of 155 acres. The Angkor Wat is an existing temple with a slightly larger complex however no ritual takes place any longer.

Every visitor has to take 7 Parikramas (round stroll around the complex before the final Darshan) denoting a semblance with the human body’s internal chakras. These strolls ensure you to adore the sculptural evidence from the period of Bhakti movement, with ornate statues either dancing or musical instrument greeting you into its interiors. At one of the Parikramas, you will come across Ramanuja’s shrine, a scholar of Vedas from ancient India and a pioneer of Hindu scriptures.

Numerous festivals take place at the temple with the 21 days long Ekadasi being the most frequented by devotees. Sources suggest a million footfall takes place on certain dates of Ekadasi, generally held in the month of December. Sri Ranganatha, the king deity comes out to meet his subject and rule his court. The thousand pillared hall decks up with faithful celebrating with Bhajans, kirtans and other musical activities. Beside Ekadasi, other notable functions are Ratothsavam (the Chariot festival, another spectacular celebration of the same happens in Puri), Chithirai Ther (a festival celebrating Vijayanagara King’s endeavour to rebuild the temple).