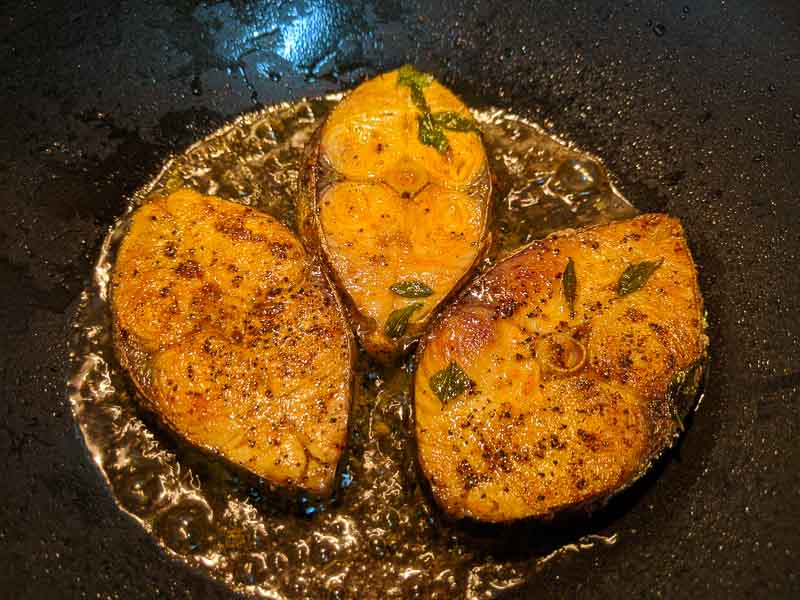 About this blog: A simple Kerala fish stew recipe I recreated at home in times of lock-down! Meen Molly/Moilee/Molee is a mild spiced fish stew in coconut milk!

We journeyed all the way from Bangalore to Kochi on a night bus. Upon getting down at Kochi, we headed to Ginger house.

Tucked inside Kochi’s Jew Town, Ginger House is a brilliant place to eat. It served us a sumptuous breakfast of Meen Molly and Appam. I was apprehensive if I would like Kerala cuisine which is much talked about for ample use of coconut oil.

Boy, oh boy, love at first sight is the word to describe my feeling about Meen Molly!

Hailed as one of Kerala’s iconic dish, Meen Molly is a mild fish stew from the household of Kerala’s Syrian christians. A medley of coconut milk and Indian spices, Meen Molee(or Molly or Moilee, the way you spell it) is a brilliant take on the coastal state’s abundance of access to prized catches, namely seer fish and king fish!

In Bangalore, we usually frequent the HAL market, famous for river fish. At Russel market or the super markets, you have easy access to sea fish but my Bengali palette craves for “Pukurer mach” if not “Nodir Mach”.

Then lock down happened and our “Pukurer Mach” (just kidding. River fish in Karnataka basically comes from the Hassan dam) was short in supply.

I thought I would just shallow fry a couple of King fish on a Friday night. But the seller at the meat mart gave me four fish steaks. I had some coconut milk at home.

Why not meen Molee then? We were anyway Kochi Bound this week to celebrate a friend’s wedding!

The best things in life happen by serendipity!

A tweak here and a touch there, here is the recipe of meen Molee that I have tried and perfected over the past couple of weeks.

Fun fact, I have used the Curry leaves from my garden. So far, my household help Vijaymma used to pluck those leaves and take them home. She has not resumed work yet! I am pretty excited in the process!