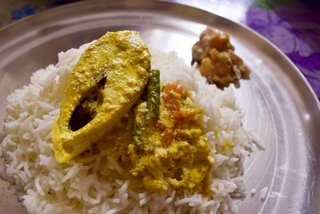 Post Puja depression is a real thing in a Bengali’s lifespan. And whom to blame? In the dingy old alleys of Kolkata, the festivities bring is an unprecedented light. It ushers the old metropolis with a much-needed splurge of energy, a measure to sustain the ensuing mellow winter, cruel summer and deluge rendering monsoon!

If Durgapuja is what your heart pines for, also read the following posts: 1. A photo-walk in Kumartuli where Durga idols are made in Kolkata 2. A guide to Kolkata Durga puja celebration by a local 3. Durgapuja in Kolkata’s Bonedi Bari 4. Durgapuja end, a melancholy

As the Durga idol is immersed in the river Ganges, we find the sprawling Kash flower lands receding towards the horizon, standing where are the azure candy floss clouds, bidding goodbye! A dead land emerges with dead bodies of rats on it, nude and arid, it seeks warmth!

As usual, food comes to rescue in the grim scene! We Bengalis would fondly name it as Bijoya Sammiloni. The Aunties and Uncles of the neighbourhood will plan a little show in a clubhouse. If it is a home affair, we will discard alcohol from the chapter. “Children are there”, Aunties will say in a hushed voice.

“Bijoya Korte Jawa”, to go and “do Bijoya” was a fairly exciting thing in our childhood. We would take turns to visit every house in the neighbourhood and eat Rosogolla, Naru and Nimkees the Kakimas of the world had made to perfection. We were not gluttons. We were just having fun! The toddler siblings or cousins would be left behind, most likely! They will be amusing the guests who will turn up for Bijoya at our house!

My father’s ancestors house is at Bankura. Bijoya is a very homely affair in the sleepy town. It would be restricted in the house visits of relatives and distant relatives and eating Chattal Bakery’s fruit cake and Guiram Moira’s Monda! Durga Puja celebration would mandatorily end on Dashami and Bankura would readily go back to the stillness of a charming old world, where handloom still remains under the grip of a man’s labour and not a machine! Which also means, we would have to get back to regular math class! Life, not cool!

Kolkata would stage a starkly different show! This is where my mother’s family resided. She grew up in a pool of cousins. The youngest of them, Kutti Mashi remained a very close friend for my childhood days. We would play a few Salman Khan songs in a music system or watch Shahrukh Khan’s movie in Zee Cinema once her homework was done. Rest of the family would arrive in the evening! The idea was to burst some crackers, since the Sammilon (get together) would highly take place on the day of Kalipuja/Bhaiphonta! Plenty of food will follow!

Bijoya in Kolkata is quite a celebration of the same stature as Durgapuja, a Hujug as many would argue! The clubs will research Rabindranath’s dog-eared dance drama books and stage a show of Chitrangada or Raktakarabi! We would have to recite a poem or sing a song! I remember the horror of reciting a poem named “Phulko Luchi” on a stage in front of some 50 odd people! That was in Bankura though!

These Parar functions (locality specific areas) will have a contribution by each of the locals (Chanda) and put that in good use to get a plateful of good food! It will have the goodness of Luchi, Cutlet, Jilipi etc! If the contribution is on the higher side, we would also get a packet full of mutton biryani!

The single most interesting thing in all these functions, be it a family or a Para , would be spread of food! Food that has historically been cooked at our households or been influenced by the British history of Kolkata. The Biryani of Metiabruz with a piece of potato has long been the comfort food of Generation X. Millenials followed the footsteps quickly, without fail!

Back in the time when I used to live in Kolkata, I would take part in the elaborate menu planning! We had shifted from Bankura to Kolkata, so did the extended family. The Bijoya Sammiloni would take place on the Bhaiphonta days, one day at Maa’s side of the family, the other day at Baba’s.

The huge kitchen utensils befitting the cooking requirements for a few dozen people are generally stored at the loft! We would take them out a few days before the party! Visiting a local market is a mandate to buy the raw vegetables. The fish seller would be specifically told beforehand to bring in the best Hilsa and largest lobsters from the river! The Mishti Doi should be made in a large earthen pot From Panna or Bramhamoyi Mishti shop! Invitations would be done with phone calls, if not physical visits! Whatsapp groups were not an apt place for such things!

The gourmet treats were of a similar pattern. You come home and get welcomed with a chilled glass of Sarbat and a few Roshogolla! If it is early morning, you will also have a breakfast plate full of Luchi and Begun Bhaja (puffed bread made of maida and fried Bringle)!

The lunch would be a neverending elaborate meal! There will be Shukto, daal cooked with a Katla fish head, a few delectable fish curries, Hilsa, Bhetki Paturi, Chingri Malai curry. The typical mutton kosha (an iconic goat meat dish, made of /Khashi, castrated goat) cooked in a pressure cooker on every Sunday will make a guest appearance at the end! Wait, finish the chutney before you leave!

We would avoid sitting on the dining table on that day. We would spread the Ashans on the floor. The Bengali frilled fabric made seats. We would seat atop them in a Babu position, crisscrossing the legs. We would have a hard time leaving the mat and stand up by the end of the meal. A Gelucil bottle would come to the quick rescue!

Evenings would be all about stuffing Chop-Cutlet or Kolkata’s Chinese noodles/fried rice (very different than that of China!). I love the latter vareity with shrimps! The evening would also mean it is time to part. Tiffin box would be loaded with food-looking love and sent along for those who could not attend the party!

If you are like us, leaving away from home and craving the delectable Bengali food, a few books I recommend as quick reference guide to authentic Bengali and Indian pleasure cooking experience :

As we grew up and left Kolkata in search of jobs et al, we have compromised on the celebrations to a large degree. Durgapuja ends in quick five days and we try and stuff as much as we can in the limited time! Dashami means “leaving on a jet plane!”But we leave with quintessential Kolkata food.

No matter how good the Hilsa is at HAL market, we would pick at the frozen Hilsa we got from Kolkata and exclaim, “wow, eta to Kolkatar maach.. wow this is Kolkata fish!” with a nostalgic pride!

In Bangalore, we arrange for the same kind of Bijoya Sammiloni, with a little alteration. Rosogollas would be replaced with Kota Kochuri’s Rasmalai! Mutton would be bought from New Frosties, Indiranagar. After a few failed attempted, luchi be replaced with some pepperoni pizza (blasphemy, I know!)!

Hilsa and Prawns are constant though! We would watch youtube and try and experiment with the chicken! Bangladeshi Shahi Murgisjol will be the end product! Loads of walnut paste, bought from Egypt, shall save its soul!
I see friends back in hometown celebrating Bijoya Dashami with laughter and glee, only to feel a heavy bit of melancholy in my heart! In ersion of kinder life, I hope Kolkata to be my forever land!

I see friends back in hometown celebrating Bijoya Dashami with laughter and glee, only to feel a heavy bit of melancholy in my heart! In an another version of tender life, I hope Kolkata to be my forever land!

4 thoughts on “Bijoya Sammiloni: A Trip Down the memory lane with Food Spread and Familia!”