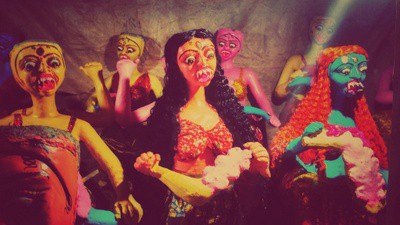 As I am writing this blog post, my forefathers from past 14 generations, along with a school of “Pretatma”, the disappeared souls with desire for Earthy pleasure have been unleashed from the hell. The smokescreens shall appear in the alleys. This is their night. Are you prepared to treat them with the relish of 14 foliage, the “Chodyo Shaak” as Bengalis would say?

My grandmother is from Borishal, Bangladesh. I can literally see the teenager woman, knee soaked in the pond water by the side of her ancestral home, venturing out to pluck a Shapla. The stem and Root may be used at Garu, the primary vegetable for this Daal, the lentil soup, along with an assortment of different root vegetables, mainly Kochu et al. The lentil used is Matar Daal. They are boiled to perfection and served with a dollop of ghee and grated coconut.

The whirl pool of local customs observed by Hindus in Indian subcontinent is a dramatic melange of Goddesses seeking revenge, demonstrating immense energy, to the extent of extreme wrath. Often they are worshiped by many school of devotees, namely Kapalikas and Tantriks, whose customs are often not in the line of simpleton citizens and looked at with fear. Well, rituals with human skull and fermented grape juice do have the potential to evoke fear. Cannot really blame.

I am recalling the days where Kalipuja festival meant we shall seek out to witness the Dakini and Yoginis, the Shakti consorts of Goddess Kali with awe as Dida will narrate the scariest of fables. How the Dakini shall tear up the fresh and only your teeth shall remain for identification. “Nomo Koro, bhalo kore nomo koro”, She used to advice. Ever since, dakini jogini is the reason why I will look forward for Kalipuja.

The end of Durgapuja and related melancholy get quickly replaced by Kalipuja, within a fortnight in Kolkata. The mother bird will try her level best to protect the babies, or the nest with tender eggs lest a festive rocket hits the tree. But the festival has to continue. With Patka, Dodoma thankfully getting replaced by soundless fireworks, we have successfully trodden on the path of being more sustainable. However, we have “miles to go.”

Andhak, the name generating from “Andha”, a blind, showed lust for his mother Durga, resulting in a fierce battle with Shiva. Each of his blood drop gave birth to a new Andhak, Raktabeej (the seed of blood). The weary mother invested all her energy in creating Kali, She started an unforeseen savage war. Her consorts were the Dakini and Yogini, the gory ones, almost gravediggers.

Dakini, Yogini, much like the goddess we worship, has largely become the girl next door for us. Almost every other Kali Mandap in Kolkata shall make you bump into one at the entrance. Dying has become just another way of living for them. Unlike the magnificent Dakinis of Khajuraho temple or that of the same from Orissa, they are very much local, in the way they dress, the food they savor, the marriage attire and every bit of detail. Somewhere between standing in front of them with nose drippings and wide eyes and holding Dida’s hand tighter, to missing the Dakinis to the extent of writing a blog post, I grew up.

I hear Kolkata’s Kumortuli has become a Dakini Yogini Avenue these days.The idols are all decked up and ready to be shipped across the globe. Amrita Gagan Chakraborty, a true blue North Kolkatan has sent across the pictures for your amusement. She is one among the many writers I adore. Read her blog and marvel!

9 thoughts on “Dakini Yogini: the Demons of Kalipuja”