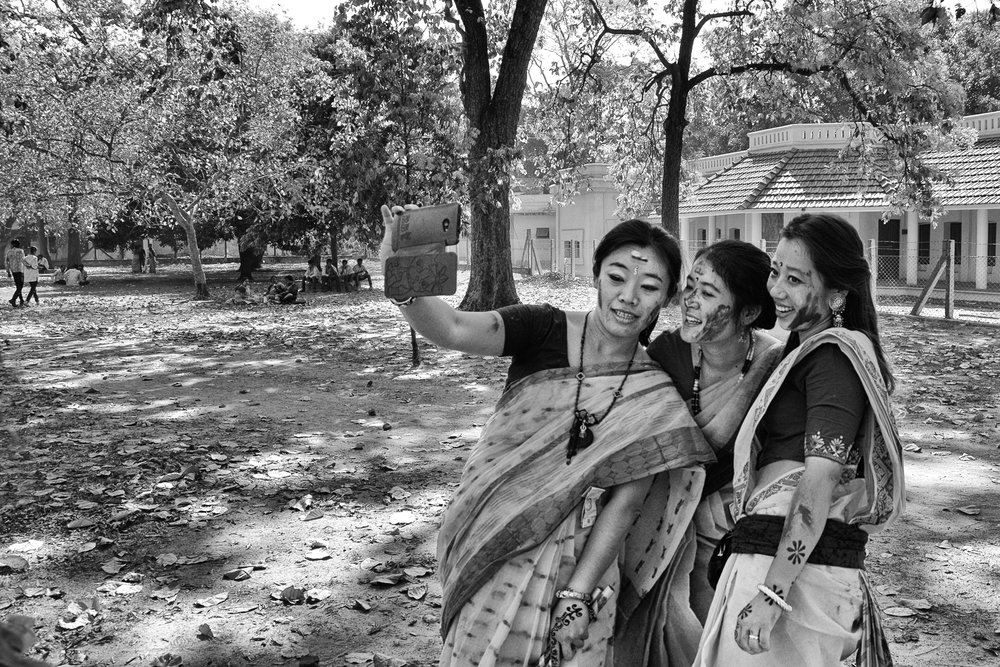 About this blog: Holi is one of the biggest festivals in India. Often dubbed as the color festival, Holi is a festival of spring in India! In Bengal, Holi is also known as Dol Utsob. The spirit of the festival remains same, however Dol Utsob or Basanta Utsob is celebrated with an extravagant cultural prelude along with organic colors. Colors used in Dol Utsab are more often than not procured from Palash, Bastard teak. Here is a blogpost dedicated to fading memories of Basanta Utsab in Shantiniketan. If you are in search for an alternate travel destination in India this season of Holi, visit Shantiniketan, founded by none other than Rabindra Nath Thakur.

Dol Utsab or Basanta Utsab is also celebrated at the Rabindra Bharati University Campus at Baranagar, Kolkata. It is a photographers’ paradise for portrait shots!

A prelude to Basanta Utsav in Shantiniketan

During my life in Delhi, Holi came and was gone twice. The days preceding the event were usually filled with enthusiastic description of Bhaang, the experience from drinking that from the previous year, the preparation. My friends would order a swimsuit or two from online world, usually in royal blue hue, matching seamlessly with the sprawling swimming pool of the resort of Gurgaon. Some had their brothers coming back from hostels for a week. Some would go for a long road trip. When I would mention of Mathura or Vrindavan, the usual look was “why would you visit a place that crowded?” I was a lone lady wolf in Delhi. My holi would necessarily be staying indoors, binging on Arabic Biryani (yes, the Vasant Kunj shop) and watching Forest Gump for the umpteenth time.

Life brought me to Bangalore in a few years. The soul of the tech city struggles to find one single excuse to escape to the Nilgiri hills or to the coast of Arabian Sea. Half of my college mates never heard about the legacy of Laath Mar Holi. And then, life happened again. I became a travel blogger! It suddenly dawns upon me, none talks about the Basanto Utsab that we celebrate in the East of the country!

It is one thing to celebrate Holi with hedonistic Bhaang, a burst of colors, away from the town in a resort of farm house, making merry with friends or families. It is another thing to celebrate Basanta Utsab, fondly referred to as Dol Utsob, at the university town of Bolpur, Shantiniketan in West bengal.

The town by river Kopai experiences an unprecedented cultural extravaganza at the onset of spring that justifies the Bengali’s claim to be the French of India! Dainty women, clad in bright yellow sarees dances on an arid land, yellow ochre in color. The dust is colored Red as Palash, a flower announcing spring from the high of leafless trees or the tender rounded earlobe of women it adores. A dust hued green and blue take a plight up in the sky as thousands sing “Ore Grihobashi, Khol Dwar Khol, Laglo je Dol.”

The distinct celebration of Dol/ Holi in Shantiniketan, West Bengal

Basanta Utsab ( Spring Festival) stays true to the quintessential liberal arty character of Shantiniketan. ‘Apart from worshipping the Formless, no community may worship any idol depicting god, man, or animals; neither may anyone arrange sacrificial fires or rituals in Santiniketan…. No insult to any religion or religious deity will be allowed here. The sermons given here will be such that will be appropriate to the worship of the Creator and Father and will help in ethics, benevolence and brotherhood…’ said the founder Maharshi Devendranath Thakur, who took an instant liking of the vast land back in nineteenth century and purchased it from the Jamindar for a token money of Rs 1.

An erstwhile center for spiritual practice making no discrimination for religions, Shantiniketan became an institute with Rabindranath Thakur’s efforts, imparting education deeply rooted in Indian heritage. Starting from the manuscript of Tibet to the Slokas of Tamil temples, every resource was indispensable. Many notable alumni of Ashram* contributed to the mankind.

Also read: Bonedi Barir Durgapuja in Kolkata: an experience that takes you to time travels!

Shantiniketan and its impact as I was growing up

Even before Taliban took control and America started to bomb, there thrived an amusing culture in Afghanistan. Saiyad Mustafa Siraj was the first person who introduced me to the country and impeccable style of travel writing in his book Deshe Bideshe. Multiple times he had referred to his life in Shantiniketan during the journey. The Noble laureate, Amartya sen, refers to Shantiniketan as home. And in line with my ancestry from Bankura, let me take pride in mentioning the pioneer sculptor Ramkinkar Baij. You can not take a stroll in the campus without noticing the fine exemplary of nature inspired Santhal human mechanisms. And these are just a handful examples of many talents the university churned out.

Basanta Utsav in Shantiniketan differs largely from the Holi celebrated in North India. The color is also known as Aabir, essentially organic. There is no Bhaang in the vicinity. Participation from every strata of society is encouraged and celebrated. It is not unusual to find the local tribe women dancing hand in hand forming a circle. The students of Pathabhaban (the school) and University (Bishwa Bharatai University) start dancing from the famed Chatim tree, the tree that brought enlightenment and peace on the founder.

The celebration of Dol Utsab at Shantiniketan goes on with music, dance, spontaneous expression of people and love. I have never heard or personally felt the threat of being groped or assaulted.

If crowd makes you weary, take a stroll to the Khowai. The purple soil of the river bed had amused plenty of Bengali film makers to shoot a scene or two in the wilderness. A deer park lies by the river bank. Make a stop to watch the locals extracting palm syrup from the trees. A baul wanders away with an ektara (Bengali version of ukulele). The mud walls flaunt jatra posters, often in Olchiki (Santhal language).

“I have seen the face of Bengal, I need not search the beauty of the world.”

Also read: A guide to the Offbeat things to do in Goa: from waters to Latin Quarter, Goa has so much on offer beyond the sun and the sea!

Things to Remember before planning a trip to Shantiniketan:
`

How to travel to Bolpur, Shantiniketan during Dol Utsab or Basanto Utsab?

A number of daily trains ply between Bolpur and Sealdah (or Howrah). The train ride is for three hours. It is suggested you get your tickets done a few weeks prior at least.

From Bolpur to Shantiniketan, the distance is only 2 km. A day trip from Kolkata is possible provided you start early.

*Asharam or Gurugriho is the place of education as described in Hindu Mythology.

PS: Shantiniketan has been in the tentative list of UNESCO sights since 2010!

Also read: Rituals of a Bengali wedding, a photo blog!

Is it really safe for women during Holi in Shantiniketan, India?

Usually, Shantiniketan is famous for being courteous to women, even during an extremely crowded event such as holi. Women actually decks up in beautiful traditional attire and embraces nature in their ensemble. A leaf or two added to headgear, Abeer smeared on cheeks and Rabindrasangeet echoing at the horizon. In line with Rabindranath’s vision, eternal beauty is celebrated and cherished.

However, I would still urge you to take necessary precautions if you are traveling to Shantiniketan as a solo woman traveler.

My visits to Shantiniketan date back to a decade and more. My father had a penchant for photography. However, as far as I remember, we did not click any photo but came back home with a lot of copy of sketches made by Rabindranath Thakur. In order to produce this blog post, I had to request for photos to the amazing photographers I know. Their kind contribution made this post look as beautiful!

The Black and White Collection for Basanta Utsab from Shantiniketan

When I requested for photos for Nilanjan Karmakar, he readily agreed to provide the snapshots, even if I wanted the colored variation. However, on a second thought, I decided to use the black and white series. The vivid life is expressed beautifully through the captures. So much life and positive energy!

The burst of Color!

You have already met her in the captures of Dakini Jogini! These are captured by Amrita Gagan Chakraborty. “Khelbo holi, rang debo na, taai kokhono hay?” We will play holi and not smear each other with color? I thought of using her vivid pictures to depict how life really looks like in the rural Bengal.

Book your stay with Booking dot com for the best price!
Booking.com