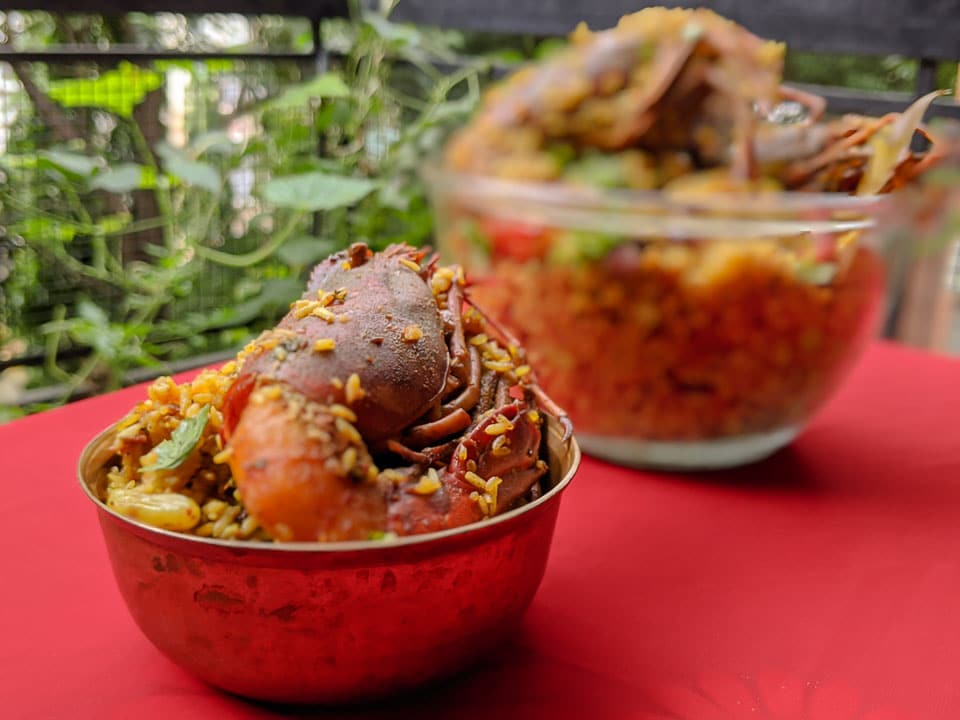 About this blog: This is a recipe for Bengali style Polau cooked with Gobindobhog rice and Golda Chingri (huge tiger prawns). Gobindobhog is a distinct short grained rice with buttery aroma which when infused with the goodness of whole Garam Masala spices and ghee, sings a melody in the cooking pot that is seldom heard of!

Read all my Kitchen adventures and recipe here: Cookbook

In Bangalore, we usually procure our week’s supply of fresh fish from the HAL market. Then lockdown happened and we learnt to adjust our weekly cooking ceremony with hyper-local shops and local produces strictly, read plenty of sea-fish. A few weeks into lock-down, yield of river started to reappear in our food map! First came these melodious Prawns, that too at a surprisingly cheaper price! What we usually buy for 1200/KG was being sold at 850/KG only. That’s a steal!

Golda Chingri is an enigma in short! Firstly, this is love at first sight! The striped shell of the crustacean creature holds a mellow supple white meat of prawn, like an oyster safeguards a rare pearl!

You fry this in heated oil and the shellfish quickly changes the color to bright red! What a delight it is to witness that chemical changes! Furthermore, if you are to layer the disparate flavors of Golda Chingri (Tiger Prawns) with coconut cream and a hint of Garam Masala spices, you get Prawn Malaicurry! Stuff them inside a green coconut, you get Daab Chingri. Steam them with grated coconut and they come out with the innate goodness of a Narkel Chingri.

What more we could do with good old Golda?

We found another fresh lot of Golda Chingri at the shop close-by on the day of Bakrid, 2020. Festivals appearing on the lock down calendar look grim and rusty, with none to share the conviviality on table. But it is the Golda which prompted me to fare up an experimental extravagance.

I have never cooked Polau beforehand. Let alone a Golda Chingri Polau. Hesitantly, I decided to move over Biryani and indulge in the universal rice pilaf dish, that followed suit to the Indian subcontinent with the Sikander’s (Alexander, okay) entourage all the way from ancient Persia and became Polau. Furthermore, with the workers from Western India, Polau took a giant leaf and reached the Caribbean island. I hear, now Polau is a celebratory dish allowing a generous medley with African diaspora. You see, that is the magic of a shared gastronomy that takes the world under one umbrella not only without bloodshed but with glee!

Anyway, the idea of using a Golda Chingri (Tiger Prawn) to celebrate an elaborate feast is sacrosanct. Usually, Bengali community is divided along left, central political views, football club or Ghoti-Bangal ethnic lines but it is the around the brass plate heaped with Gobindobhog Chaler Polau, they agree to come together! In a nuanced expression, I added Golda Chingri to that Polau!

Inadvertently, I wanted good great pictures of the Golda! I also happen to live in one nation at the great Pilaf belt of the world, where Polau, no matter how you call it, palau, pilau, plov, pelau, piláfi, pulav, palaw, pilaw, pulaka.. calls for careful one pot cooking skill under watchful observation and a free hand at spices.

“Chingri Pulao” it is, I announced while deftly applying salt and turmeric to the prawns! I was rising from the conflict of cooking either Polau or Biryani with the fresh prawns. I wanted to relive the extravagant court traditions of the Moghul empire. I wanted to play along the subtle nuances of layering many contrasting flavors and spices. It had to be Polau, a very Bengali way! Instead of Basmati, I chose to use Gobindobhog rice, which is canonical for us the rice eaters of this part of the world. A lot like how the Iranians swear by Domsiyah in their Pilaf dishes. I introduced coconut milk because it renders an inexplicable aroma!

As I said before, I had never cooked Prawn Pulau beforehand, neither I tasted. I was elated to open the lid of the cook-pot and find each rice strand separated in all their glory, a great indicator of the perfect Pulau. It yielded to 4 meals.

The Persian connection of Pilaf and Polau unveiled in front of me as I was emptying the cooking pan. The bottom of the pan was distinct from the whole lot with extra golden almost caramelized rice morsels drenched in ghee stood out in the crowd. This is what is known as the elusive tah dig, the most loved part of Polau in Central Asia that is served to the supreme guest. Tah Dig is used to prepare a special kind of tea as well. Thus a Bengali girl who cooked an experimental Golda Chingri Polau at the Indian peninsula re-discovered an ancient socio-political route deeply entrenched in our gastronomical heritage. I do not know about you, but I regaled in this revelation!