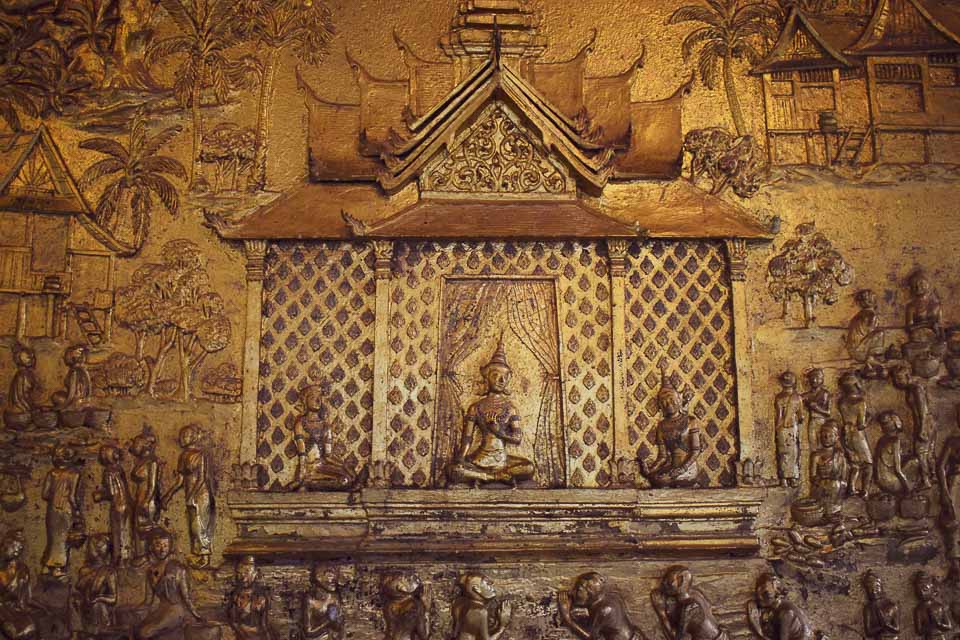 Is it ethical for a tourist to participate in the morning alms giving ceremony of Luang Prabang? Is it even a human practice to witness the age old tradition of monks collecting alms in form of rice and other food items, which practically helps sustain them, while you are busy pressing the shutter button of the camera? Be a responsible traveler and make informed decisions whether you should attend the ceremony while traveling in Luang Prabang.

Tales of Jataka flashed in front of my eyes as I first learnt about the Alms Giving ceremony of Luang Prabang, Laos. Buddha, during the rebirths, would go from door to door of a community for “Madhukari”. Women would be glad to provide for a morsel of rice that would help sustain the wise man his choice of frugal lifestyle. Buddha, who was born as Siddhartha Goutama, the heir to the throne of Kapilabastu in modern day Nepal before he attained Nirvana.

Often touted as “Must Do Activity” in Luang Prabang, the morning alms giving ceremony dates back to antiquity, the 14th century to be more specific.

I was staying at he Sofitel in Luang Prabang. I was told there are a few prominent spots in the city where alms giving take place. Then there are a few less popular streets where locals share binthabat, what is known as “Madhukari” in Bengali with the monks.

What are the differences between the two? I asked. Surprised, because I knew the main road is bustling with enthusiasts in the morning. “Experiential travels” I recall a pamphlet depicting a scene with orange robe clothed monks and women filling up their alms bowl from the bamboo basket placed on the street.

The front desk lady smiled coyly, “Not every monk like the crowds.”

In that one sentence, I could decipher how the impact of tourism affecting this ancient custom in myriad ways.

I did not attend the Alms giving ceremony of Luang Prabang. Firstly, I had a fair share of idea what entails the system. I was an avid reader of Jataka tales while growing up. In the shared culture of the Indian subcontinent, tales of Buddhist monks often highlight the minimalist lifestyle the devotees pursue.

Also, I am a later riser. I am scared of stray dogs too. And I had to meet them as I would walk down the street from hotel to reach the main road.

May be you want to experience the alms giving ceremony first hand. Your life-story is different. That is fine. Here is all the information that I could gather about the monks and this revered practice in Luang Prabang, as I spoke to the locals. I hope these will help you to decide whether you should be there as the ceremony takes place and if you do, how you must behave.

The monastic community of Luang  Prabang shares a symbiotic relationship with the local residents. Locals wake up at the wee hours of the day, prepare a few fishes including the Laos staple of sticky rice, go to the main street and wait for the monks walking down and collecting the alms.

The Alms giving ceremony of Luang Prabang takes place at the start of the day. The houses of Luang Prabang are teeming with faint light at the crack of the dawn as the women in the houses are preparing food for the monks. The monks are allowed to have what they collect from the locals until noon. It is imperative to prepare fresh, nutritious food for them.

Tat Bat takes place from 5:30 am in the morning and continues for an hour or so. The timing changes in the winter months from November to February, with the ceremony starting at 6 am.

Men and women sit on the ground. They are mindful that their toes are not shown or pointing towards the monks. They often adorn the Laos traditional scarf from the shoulders. Many houses has a specific alms bowl (bat) for the Sai Bat (morning ceremony) made of gold or precious metals. The most visibly present bowl is made of bamboo though. Thousands of candles are lit.

The roads of Luang Prabang are brimming with an air of spiritual feel. Many people chant till the monks arrive, some 200 or more in number. It is the sheer number of monks that makes the ceremony of Luang Prabang exceptional. While they chant, many prepare multiple rice balls from the basket in order to be swift while giving alms.

You might see a number of young monks. Many young children in Laos spend a large part of their lives in monastery, as a part of schooling. They might go back to regular life once education is completed. Many describe life as a monk is a result of the “sacred calling”.

By giving alms, locals in Luang Prabang and devout Buddhist believe to have earned merits for the next life. In Asian cultures, communities have deeply steeped believe in rebirth and karma. By giving alms, they earn “Bun”, that will enhance the chance of a human rebirth.

On a typical day, Monks wake up at 4 am. The wats resonate with the hymn of morning prayers and meditation till 5:30. It is then, they leave the temples and come down among the locals for collecting alms. I have had the good fortune of witnessing one such morning ceremony at Shey Monastery, Ladakh.

Monks descend from the numerous monasteries and temples located in the close vicinity of Luang Prabang. They have a lidded bamboo basket hung on a strap from their shoulders. In this, monks collect the banana, sticky rice wrapped in banana leaf’ or grape vines, even some money at times. Alms giver respectfully bow down in front of all the monks. Monks are strictly not to be touched, neither to be made an eye contact. A sublime underline of humility is basic need.

Did you know? Buddhist Monks lead life based on a set of 227 rules. The rules design a monk’s life in a way that he would never commit crimes such as harming any living being, stealing, sexual assault, gossip or use profanity in language and using of alcohol or drugs

Also read: Where to stay at Luang Prabang?

Reducing the Ceremony to a Tourist Show

As much as it pains to write this, on the hindsight of tourism gulping down the austere ceremony to a photographic opportunity, a monk had once stated, “We do not feel like collecting the rice anymore.” This is particularly concerning given alms giving ceremony is also a basic measure through which the Buddhist monks sustain their life.

Clamors and clatters of shutterbugs, weaning sound of sleepy children, tourists loosing enthusiasm quickly as the ceremony begins and continues for an hour with repeated frames, unscrupulous people willing to get a quick shot with a monk. All of these mellow down the intense air of spiritualism of the early morning.

It is no wonder monks berate the distasteful behavior. Imagine making noise at a mass-gathering at a church, or monkey-dancing in front of an altar where people are steeped deep in a meditative state. As the crowds grow bigger, it is difficult to tackle them, or make them adhere to the set rules. There are markers at the end of the road instructing on silence and no flash rules. But most do not care. The banes of over-tourism. Sadly, Luang Prabang was not spared either.

Also read: Guide to the Night Market of Luang Prabang!

What should you do if you want to take part in the Alms Giving ceremony, Luang Prabang?

First of all, there is no point in taking part in the morning alms giving ceremony or Tat Bat in Luang Prabang, unless you are Buddhist devotee and this ceremony has a deep meaning and impact on your life. Though it is now open for non-Buddhist people as well, especially as the locals have learnt how tourism boom helps the economy.

It is only then, you may request your hotel or guest house to prepare some food the night before. It is imperative to provide the monks with fresh food. Thus refrain from buying food from the multiple stalls that surround the main market with makeshift stalls. Do not give heavy boxes either since they have to carry it back a long way.

Do NOT treat the alms giving ceremony as a photo op, that you hold a rice ball in front of the monk and someone clicks a picture. It is as stupid, as stupid can get.

A few more customs you must adhere to if you want to witness the Morning alms giving ceremony from a distance, from the “crowd”.

You shall find many monks sharing a portion of their alms with small children waiting outside main market area the ceremony takes place. Thus, alms collected helps sustain a surprising part of the community, often invisible to frivolous eyes.

To understand how the tourist crowd has been eroding the soul of the ancient alms giving ceremony, visit one of the side lanes and be a part of the comparatively thin crowd. An air of respect fills the ambiance o its brim. You will know what Tat Bat means to the people of Luang Prabang!