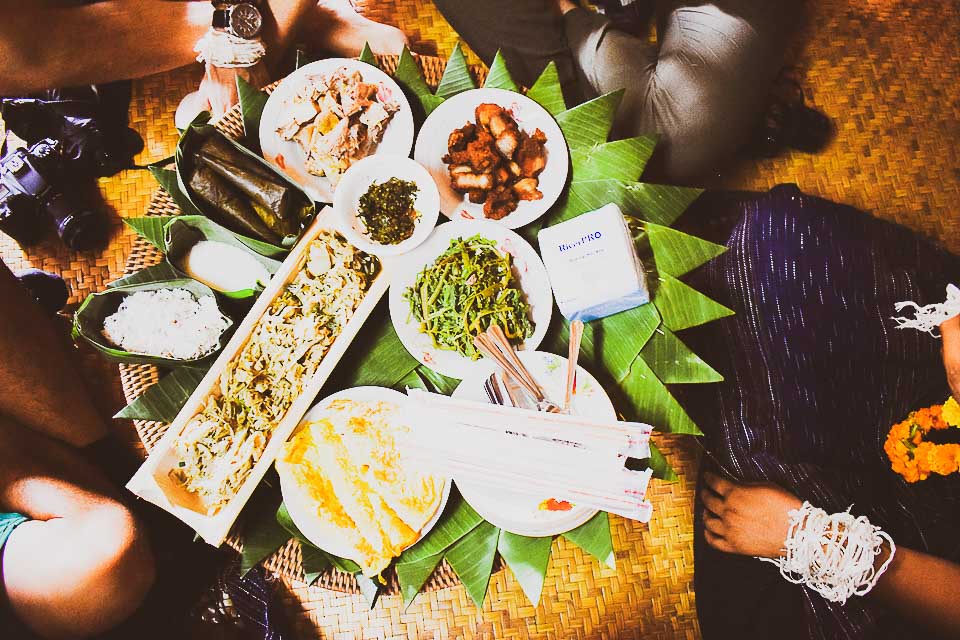 “Traveling – it leaves you speechless, then turns you into a storyteller.”

If I am to pick a single overwhelming cultural experience from Laos, the one which truly opened the door of my heart for the people of Laos… the one which made this beautiful and often misunderstood country etched in my memory forever, it has to be the Baci ceremony. The profound impact it left in my mind is a matter of pride and humble acceptance. I kept asking myself, “Am I truly deserving of so much love and warmth?” All through the time Baci took place.

We were on our way to Nong Khiaw, a remote offbeat hill destination somewhere perched atop the hills of Northern Laos.

We had already seen the breathtaking beauty of Luang Prabang, where the old and new of architectural trends of the west and the orient are happily juxtaposed.

My eyes soaked in the abundance of natural beauty that adorns the highway. In a couple of hours, we stopped at an old Chinese tribal village named Na Yan Tai.

People, of this village were nomadic. They kept moving for greener pastures until a few decades ago, when the whole of Indo-China did not set for a hard border.

Now the village looks settled, with wooden houses leaving space at the ground floor for domesticated animals. Flags stamped with hammer and sickle hoist in the air, alongside Laos PDR’s own red and blue stripes. The entire village ruminates on a melancholic song played on a radio. In my mind it played a chapter of history as described in the old Soviet books. Laos PDR is a Communist country. The community living and farm yield testified to that fact.

Villagers of Na Yan Tai are now savvy with indigo weaving. They know the art of handwoven fabric, which a connoisseur’s eye will consider a prized addition to artistic fabric collection. I am from India. I know a thing or two about fabric!

We were welcomed with a glass of welcome drink, made of an edible flower. Here, they make tea from Clitoria flowers. We call that Aparajita in Bengali. I have seen cottages here laden with white gourd leaves. I was hopeful, they make the best use of these foliage like we Bengalis do (ie, eat)!

What is a Baci (Basi) Ceremony?

Soon after we proceeded for the Baci ceremony, which was to be performed on the first floor of a wooden house. The room was emptied to make space for people. Us, the group of tourists along with the villagers. Soon we realised, the entire village came. We all settled in that room, comfortably!

Baci is an age-old tradition in the remote parts of Indo-China. The ceremony is common among the hill tribes of Thailand, Vietnam as well as Laos (where I experienced it).

In olden times, the world ran on commitment and word of mouth. Commitments were revered, so much so that a Baci thread could have saved you from enemy attack, given you a free pass along these dangerous terrain, opened avenues for unexpected friendships and above all ensured your safety in the region.

As a participant of the Baci ceremony, you become a part of the tribe. A friend, not an alien anymore. You can be trusted. Someone has vetted for you.

I felt all these myriad emotions and more, mostly pertaining to friendship in the entire episode of baci (also spelt as Basi).

Truly, friendship is the hardest thing to explain!

How is Baci ceremony Performed in Laos?

Baci traces back its legacy in Southeast Asia prior to Buddhism conquered this land with its ideas of peace and love. Seamlessly, Baci became assimilated to the ensuing cultural tradition of the region. Be it an occasion of joy or an occasion of mourning, Baci is performed. Baci threads are tied at the hands. Usually white cotton or silk threads have now changed color and embrace red or yellow or black hues. Black is a sign of mourning.

A wedding ceremony in Laos is incomplete with an elaborate Baci ceremony. It is believed that the partners are inseparable in Laos tradition. They come together on the face of the earth, with their ties being severed by “wind of scissors”. With Baci in place, the ties are reinstated, or so goes the local belief system!

Birth of a child or an annual festival or anything special, even the arrival of special guests, will call for a Baci ceremony in Laos. It usually takes place for an hour at the maximum, ideally before noon.

A cane basket named Paw Kwan was set at the center of the room. We all gathered in a circle around it. The head of the community, an elderly gentleman sat with folded hands and a pot full of water. He took a bunch of leaves and using that he drizzled a few drops of water to the attendees. Then, he took one loose end of one Baci thread, closed his eyes and started to chant Mantra.

The room was resonating with hymns chanted in Laos. We all sat with one loose end of the Baci thread in hand. Folded hand to be more specific. Our shoes were left at the doorstep.

The Paw Kwan is one elaborately designed cane tray. It was adorned with flowers, rice wine, and various offerings common in the region. Think, a packet of chips. A few cigarettes!

Once the chanting stopped, the villages moved and how! They went in a circle, anti clockwise, with the cotton thread in hand and tied one to our wrists. Each one tied two threads on each wrists. They kept chanting something while at it. Upon tying the thread, they held their one hand high, close to their chest. It is a greeting. A way of showing respect.

We were to keep that thread for the next three days. Ideally, Baci threads should drop off on their own but rules are relaxed as lifestyle demands them to be, in every community.

Once the ceremony was over, we indulged in the sumptuous food and drink served at the village. There was an abundance of sticky rice that the locals ate. Along came a sweet. Boiled tapioca covered with grated coconut. Fried eggs and chicken were served with rice. Banana and fruits were there as well.

It was during the Baci ceremony I tasted the rice wine. (Watch the video to see my expression!). The rice wine of Laos is a rather strong local moonshine which is served at every prominent occasion.

Once the Baci ceremony was over, we went for a village walk. On the way we found women busy at chores with cleaning and weaving indigenous fabric. They take anywhere between a week and a month to make these scarfes and the skirts, sell them to various agencies who in turn sell them at tourist spots, say Luang Prabang or others. The fabrics were exquisite and the price was surprisingly low. Think USD 20 for a skirt! That is incredible!

Prices might be a little higher at the Luang Prabang night market, if you get one. You get many other handmade souvenirs here. But that you have to pay considering someone is sourcing them from so far!

To take part in a Baci ceremony, you may contact your hotel or guest house and get it arranged specially for you. This is quite an eloquent and elaborate cultural experience, missing which you make your Laos travel incomplete!