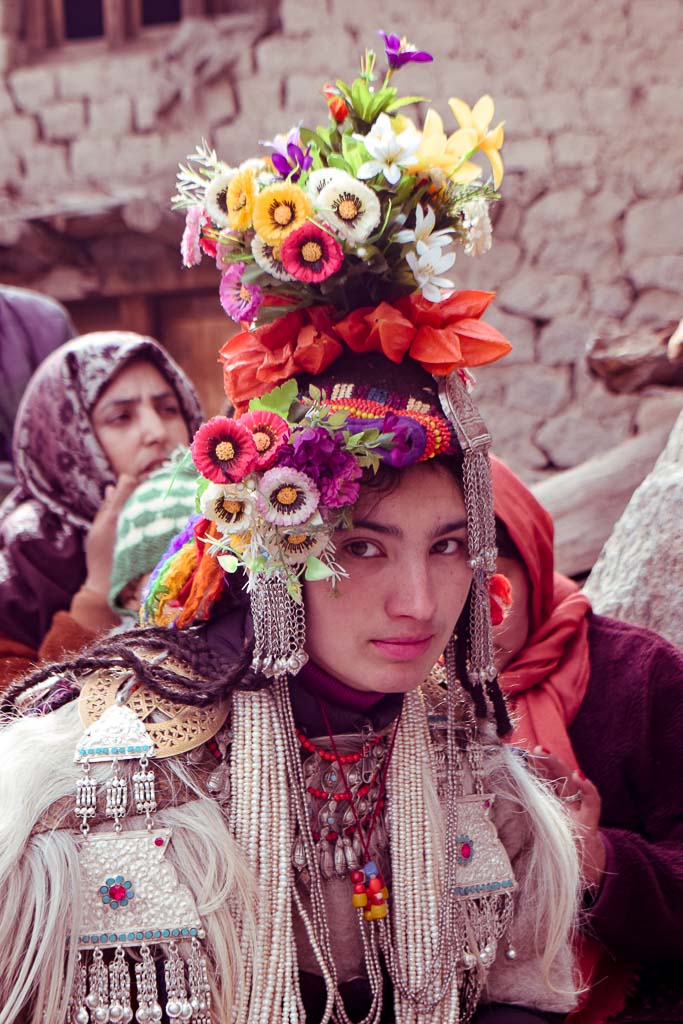 In the late 90s, the daily news which steadily grew in popularity and made Mir a star in Bengali households, was broadcasted as “Khas Khabar”. The news show ended with a segment that talked about lesser known quirks on the face of the Earth. One such news showed us the last remaining Aryans. It has been more than two decades but I vividly remember their attire, which was basically a riot of colour embodies a human mechanism against the stark backdrop of a barren yellow mountain.

As Universe had planned it for me, I had a chance to visit Leh a couple of years back. We made an impromptu day trip to the “Aryan Village” on a bright sunny day. Neither us nor the Aryans were prepared to meet us with any grandeur set up. We saw the rural families go by everyday chores in their natural selves. No costume, no festival, nothing! While some will call it Meh, I rather enjoyed the endearing, authentic experience. There was evidence of distinct cultural practices for those with a keen eye. The apricot branches were laden with fruit, the elderly lady with elaborate braids who made the longest trip of her life to a town named Khaltse at a distance of 5 km, the stone kilns for making breads. Time stands still here.

The Aryan tribes stayed at the fold of the Himalayn craggy peaks, around Batalik sector amidst a green patch of land. The greens of this area can be attributed to the flow of the Indus river. Earlier, the villages were set up by the banks of the river however ferocious flow of Indus did not allow that for long. hence people moved up, hoping to escape the river’s wrath.

From the first visit to the Aryan Valley, I returned with a bag full of Apricots. The Aryans gifted us more than what we could accept with two palms folded. Then the urban souls that we are, we thought we could help them with a purchase and that is what we did. They charged us less than 100 rs for more than a kilo of the dry fruit, the bloodline of Areyan Valley’s economy. Not so long ago, the Aryans used to trade Apricot for salt with the plainlanders.

The second visit to the Aryan Valley, which was organized by UT Ladakh Tourism as a part of Ladakh Winter Conclave, was different. It was a rehearsed show of cultural practices of the Aryans.

We were to reach Garkon village of Darchik. There are 4 villages in the area, Dah, Hanu, Garkon and Darchik. In sharp contrast to last time, we had a bleak network connectivity in the region. Google maps try hard to point out the Garkon village however the roads are winding, often scary looking and misleading. We drove past Garkon village for more than 10 KM and had to turn back. Desperate to find the village, some of us were even trying to smell the air and find some aroma of food. They must be preparing mutton for the guests, we thought.

But, who are these Aryans?

An air of mystery blurs out the past of this distinct tribe. They could be the last army men of Sikander’s troop, set to conquer the world. Wounded and battered in endless battles, they might have stayed back waiting at the peaceful Himalayas while the emperor had headed back to Greece for a temporary respite. However, he breathed his last on the go and the army, leaderless, had to fend for themselves.

Myriad mythological tales loom large at the Himalayn peaks. Decades of research and yet we have not even scratched the surface of that historical wealth!

The other line of research connects the Aryans with Pakistan’s Gilgit Baltistan and Khyber Pakhtunkhwa and eastern Afghanistan through linguistic heritage. They speak Dard-Shina,  a language which has no script, making it almost impossible to track down their history. In Ladakh, people also call them as Brokskat.

While most of the people of “Aryan valley” identify themselves as Dard Buddhists. I have learnt from Mr Anil Rajput that the Aryans belong to the race called Bon, the Monpas of Tawang. Lately, interreligious marriages with the Shia Muslim community have also resulted in conversions of some of the Aryans. Despite mainstream religious identity, Aryan’s age-old animist faith and ritualistic practices remain strong. Nature and her many elements remain a primal focus in an Aeyan spiritual belief. The original custom of the Aryan tribes is to worship rivers, trees and mountains which dates back to thousands of years, DNA testing conducted on the group indicates an ancient and very isolated community.

Also read: Is it worth visiting Kargil? How I spent 4 days in the valley!

Note the grandma’s pearl and silver strings which perfectly compliments her hair braids in silver.

People of the Aryan valley have long been exoticized for their physical features. The long noise, the turquoise blue eyes, an erect tall body and seldom found blond hair have often piqued people’s interest and gave way to raging rumors. One such statement is the Aryan valley has long attracted Europeans who are in search of “Pure Aryan Blood”. Without going into specific details, legends has it that people come, stay in the valley for a while, fornicate with the locals and go back with a child of “Pure race”. I know this is stuff made of cringe but it is not the distinct culture but this particular rumor which introduced Aryan valley to the greater world. When I asked the locals about Pregnancy Tourism, and I asked a number of them on multiple occasions, I received denials in answer. Some of the men turned pink while blushing!

The Aryan valley consists of 4 prime villages, namely Dha, Hanu, Garkon and Darchik. Usually, people marry within these villages. Life revolves around this small geography and in the yester years, not many people knew of the tribes, neither the tribesmen left to explore the world beyond the mountain. It is in the recent past, many endeavors have been taken to bring tourism in the valley aiming at economic development. We met a couple of girls who had visited Bombay with a traditional dance troop. The entire village seemed to be proud of them! Despite its remoteness and rather small population, the Aryans have a sweeping 84% literacy rate.

Otherwise, life in the valley heavily depends on seasonal produce. The short lived summer in the Ladakhi mountain generously helps in blooming berry: Mulberry (white, red, black), Blackberry, Gooseberry etc. The Apricot fruit, seed, oil are the cash crops of the region. Poultry is not a part of the traditional diet of the Aryans. Mutton or sheep is made into a stew and are an essential part of any communal meal post a celebration. Celebrations take place based on the solar calendar. The Aryan region is known for producing amazing quality of grapes too.

Also read: 25 beautiful pictures that will inspire you to visit Kargil!

The elaborate Aryan headgear, also known as Tepi. It is made of old silver coins, sharp needles and many colorful papers in the shape and form of berry flowers. It was peak winter and real berry flowers were amiss in the valley, which is not the case if you visit during summer. The Aryan headgear is heavy and demands practice to be worn during a dance.

FAQs about visiting the Aryan Village, a rather offbeat travel experience in Ladakh

1. The nearest town to the Aryan valley is at khaltse. You can make a day trip to the Aryan Valley from leh (which is what we did) or you may visit this place on the way to Kargil.

2. It is recommended to trust a local tour agency to arrange this trip for you if you are interested to watch the cultural activity. The price range varies between 5000 to 15000 depending on the group and I recommend Roots Ladakh for one such tour plan.

3. Kindly be respectful to the locals and nature of the valley. Aryans remain much of their ancestral animist practice that involves worshipping nature. they are basically nature’s child and the importance of safeguarding natural wealth remains paramount.

4. Reaching the Aruyan village involves a bit of a hike. It is an easy road to walk but go prepared.

5. It is cold, especially with the blowing wind at the top of the valley. Dress accordingly.

6. If you are served food, be gentle and do justice to your plate. Do not waste. Remember how difficult it was to source the food in this obscure geography in the first place.

7. The first time we visited Dah Hanu village, I had to procure a permit from Leh Town. While visiting from Kargil, we did not need that. The fact that Ladakh is a newly formed Union Territory has brought in changes to a lot of official rules. So did the lockdown.