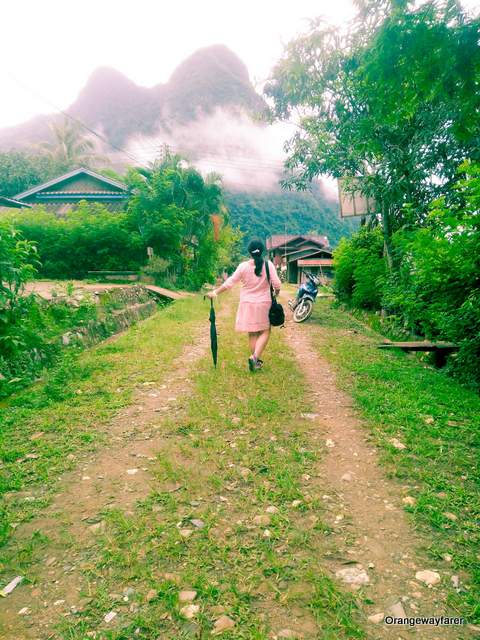 Luang Prabang takes time to grow on your mind. And once the sapling has grown inside, it will take forever to uproot her memories and plant it to a new destination. The landlocked country of Laos has experienced the Mekong turn into a monstrous river and flood the vast rice fields. History has taught this flood is only an onslaught of a prolonged fertile season. Laotians families will don the conical hats and busy themselves at the field. Unlike the neighboring countries, holding the crowning glory of the quintessential Asian destination, Laos is yet to experience an influx of tourism crazy frenzy. Not every temple is frequented with selfie crazy tourist (yet). The ruins of ancient temples, the remnants of the fierce America war on Vietnam, the real authentic life of local is a live scene everywhere.

Yet, I knew hardly any of them! In my mind, Luang Prabang was the end destination of the “slow riverboat tour” that starts from Chiang Mai, Thailand and floats on the Mekong! The good news is, I know better now!

Jump to Content: show
1 The land of Million Elephants, and a few Dragons!
2 The Mighty Flow of Mekong River
3 Francophile much?
4 For the love of Rice, umm, sticky rice!
5 Templed-Out at Luang Prabang! That is a real thing!
6 The Laos Coffee! A beautiful beautiful Surprise!
7 The Lao food: a Meaty affair!
8 Nature’s wonders: the TRUE hidden gems!
9 Hues of Indigo: A village of the Weavers!
10 A War that Laos Remembers!
11 The Night Markets of Luang Prabang!
12 Subscribe

The land of Million Elephants, and a few Dragons!

Luang Prabang had historically been the seat of culture and Buddhist tradition of Laos. The Chinese influence on Buddhism is immensely noted in the region. Buddhism becomes saturated with many mythical creatures, folklores come to enrich them. The mountains surrounding the regal seat of Luang Prabang becomes quintessential dragons!  They live, breath, make merry with the countrymen, as well protect them from enemy unforeseen in trying times!

The Mighty Flow of Mekong River

If you want to touch the soul of Southeast Asia, you need to understand the whim and fancy of the river Mekong! I was intrigued by the river ever since I watched this movie, Apocalypse Now! To have had the sheer luck to row a boat on the Mekong, the sacrilegious river by Buddha is beyond worldly expressions! Even though I have lived by Saigon for a few days, the Mekong in Laos is different.

She is pretty and orange. She is in her vibrant youth. Her flow is punctuated with the hillocks decked up in dense lush forest and limestone creeks. Many tribes live in those jungles completely cut off from a world, often described as the global village! They will touch you, pull a few strands of your hair and be overwhelmed if you happen to cross many intangible boundaries and reach that part of the world, I was told!

I am from India. To be more specific, I am from Kolkata where the chief minister makes it to her political agenda that one day Kolkata will become London! I completely understand the efforts Luang Prabang puts in place for preserving the colonial heritage. From the street vendor’s baguette to Sofitel’s elaborate duvet, Luang Prabang clings to the French memory in a forlorn romance!

I can literally kill for that piece of bread! If that is a tad bit overhyped, I can at least wake up early for a hearty breakfast!

For the love of Rice, umm, sticky rice!

Laotians love their rice. The vast land at the foothill of the mountains is adorned with paddy fields. It is quite a sight to see the endless Kochi Kolapata green, especially at the advent of the monsoon!

Rice farming is a family affair in Laotian families. Children come back happily from school and take part in the yield. Not much of a surprise why the Bengali in me was elated looking at the staple food and the field! I remember telling a friend about how Bardhaman, also known as West Bengal’s rice bowl, resembles the same during monsoon, sans the mountain silhouette!

How pretty the traditional Laotian meal looks like? Also, a meal is a communal affair in local Laos households. they are often decked up on a cane basket and served on a low height bamboo stool. I especially loved the use of Kath Golap flower, also known as Frangipani and Luang Prabang’s synonym!

Templed-Out at Luang Prabang! That is a real thing!

If you are coming from Bangkok and have spent a few days to explore the city’s riverside temples, you may not trust Luang Prabang with anything new. And once you reach, you will know you have never been more wrong!

Temples in Luang Prabang are as beautiful as Benarasi sarees if I have to compare or take a reference to elaborate the beautiful architectures!

The enamoring usage of golden hue on a bed of rust red against a backdrop of the azure sky is overwhelming.

Also read: 2 weeks in Malaysia, for the cultural traveler!

While the neighbor country Vietnam has attracted lion’s share of the media and discerning taste of coffee connoisseurs, Laos has secretly made a revolution in its coffee production! saffron cafe by the Mekong river will be my choice for the best organic coffee in the town!

The Lao food: a Meaty affair!

Since I was invited on a FAm trip by the Laos Tourism Board, I had the good fortune to taste the real local food and not just grilled meat and fish! And, I was amazed, truth be told. It is nothing like the Thai or Vietnamese variants of Asian cuisine!

I had the regret of discovering Phi Phi island, all infested with humans! Humans and boats, to be more specific. The day trippers and death of a pristine bay!

Kuang Si, with her ethereal beauty in each step is a pleasant surprise hidden behind the tall old trees. It is made with care and love, by the nature and every detail has been taken care of!

Hues of Indigo: A village of the Weavers!

On a fine morning, we drove to this nearby village of weavers! The villagers tied knots on our hands from the Baci ceremony and welcomed us with a piece of handwoven scarf.

I am a Saree lover and claim to understand a bit of weaving! The skill villagers had implemented in their weaving style astounded me! Every house had their own style of weaving and colors. The procurement is organic in true form and production is slow but arty!

A War that Laos Remembers!

The year 2018 had had former US president Obama visiting Laos PDR and promising a lumpsum donation to help detonate the unexploded bombs from the American war on Vietnam from the 1970s. The rural parts of the country had been bombed mercilessly and remain the most bombed part of the world!

Some of the households have had bombshells discovered from the courtyard and dismantled and used them further for household supplies! Such a poetic justice to a ruthless weapon of terror!

Entrance to the caves of Pathet Lao. A turbulent time when governance was conducted from this cave!

Also read: Complete guide to traveling in Vietnam for the first time traveler!

The Night Markets of Luang Prabang!

Luang Prabang has plenty of markets. The morning one is used and frequented by the locals and the night one is touristy. For the virtue of being touristy, the latter also comes with showcasing some of the best talents of the region. The hand paintings, the hand-woven fabrics and scorpion infused wines are surely a treat for the eyes!

Want to book a stay for the next vacay?