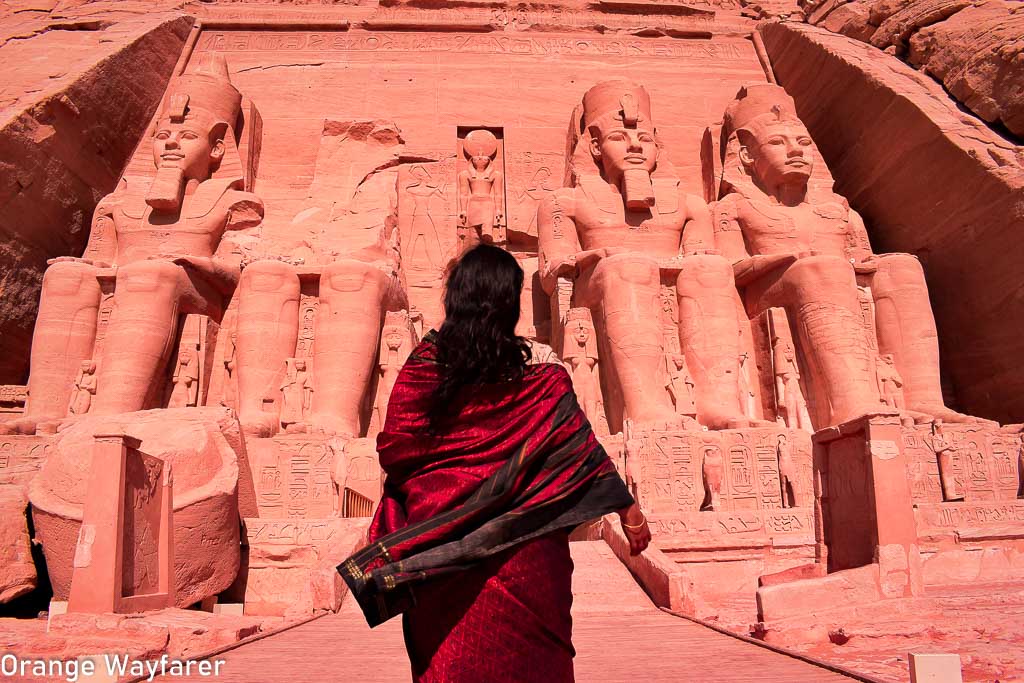 Tracing back Antiquity in Egypt Captured in 20 Travel Pictures

With an abundance of historic artefacts, nuanced course of Middle eastern politics, amicable locals and shower of ruthless sunshine, traveling to Egypt is overwhelming. I have written detailed blogs on Egypt travel tips, a perfect itinerary for backpacking Egypt, advised on possible travel costs but Egypt is so much more than that!

You need to walk on the dust sediments gifted by the old Sahara desert under a moonlit night while the profound necropolis loom large by the sprawling metropolis of Cairo. You need to witness how pacy metro line can easily juxtapose with thousands of years of pyramids. You need to take koshari, a vegan friendly staple found in Egypt in abundance followed by a a glass of hibiscus juice. Standing right at the heart of Tahrir Square, the birth place of Arab Spring, you need to glance at the serpentine course of Nile river, and feel surges of emotion! As much as the pyramids of Gaza remain a true wonder of the world, the very existence of Egypt is nothing short of a miracle.

In this blog post, I try to highlight pictures of Egypt, the magical land of pyramid and resistance and kindness and power politics, as I witnessed in my short stint. These pictures leave me wanting to revisit Egypt, and relive these memories and more!

the Great Pyramids of Gaza stand at a distance to the west of Cairo. Historically, Egyptians believed the dead live in the west and the east is home to the living. And yes, Pyramids of Giza are not located very far from downtown Cairo!

A crimson sunset sky illuminating the Cairo canvas! This was the day of Eid al Adha. I shot this from the foot bridge over Nile that connected Zamalek (an expat “ghetto” located at a riverine island on Nile) with downtown Cairo (Tahrir square. The air resonated with people’s mirth and celebrations! I love navigating through an urban space to tap into the pulse of a society!

While Egypt is a Sunni Muslim majority country, Cairo being a truly old metropolis has seen many communities living in designated quarters and holding on to their distinct custom. this is especially true when you visit the Coptic Cairo area. I am conflicted in my mind as to which place i hold dearer in my mind, Coptic Cairo or Islamic Cairo!

Also read: 20 photos of Ethiopia that will inspire you to travel.

A mummy I clicked at the Egyptian Museum, Cairo. While the first time I saw a mummy, I was at the national Museum of India, Calcutta, I did not feel the astounding feeling of amazement. Here in Cairo, I stood witness to this human mechanism that resisted the gnaw of time for a whooping 5000 years time span! The soul departed but the man remained. Probably he was a Pharaoh. A man of fortune, power and unrelenting following. One of the most powerful men from lower Egypt. Now wrapped in the protective papyrus which too dates back to thousands of years and safeguarding the human mechanism! This was incredible.

Lo and behold! the great pyramids of Giza! The only standing old world wonder of the world of the seven others which blended in with dirt!

Depending on the time of the day you visit this place, you will be fully acclaim the experience. We did a mistake, visited the Giza Pyramids at 10 in the morning with the sun shining bright at the dome of the sky and our whole body burning! No amount of sun block provided respite from the scorch!

Also read: Zanzibar, a romance between Indian Ocean and the old island state captured through 20 photo!

The queen Nefertiti portrayed on an earthen plate sold as a souvenir at the famed Khan e Khalili market in Cairo, Egypt! It is nice if you know about the queens and Pharaohs and the intriguing history they inflicted on Egypt. It is okay if you don’t. Just buy the souvenirs bases on riot of colors on the pallet and come back and educated yourself (may be) on that particular entity. History, especially that ancient, will not change easily!

A beautiful sunset taking place at the backdrop of Nubian village as seen from Aswan. A Nile cruise ship is docked at the river bank. Nile cruises do not sail a lot as the distances they cover are not that great.

Astounding window art of medieval Egyptian world by the Orthodox Christian community as captured at the Coptic Cairo museum! The intricate art of this window reminded me of Rajasthan, India !

Visiting departmental stores of a new country is one of my most favorite travel activities. I think this is written in Hebrew? I shot this milky drink at an upscale departmental store at Zamalek where I also shopped for many gourmet souvenirs.

An ancient Egyptian God carved out of a hippo teeth! I shot this at the Egyptian Museum!

Cairo nightlife as captured on the night of Eid al Adha!

Glimpse of Cairo, the dusty city in faint pink hue during golden hour from the top of a mosque from Islamic Cairo, another must visit destination in Egypt!

Not many visit this place but the stepped pyramid of Saqqara was the first pyramid built in ancient Egypt. The structure collapsed due to imbalance in structure and then came the Great Pyramids of Gaza but Saqqara can be an interesting detour nonetheless!

A horse carriage that we wanted to get rid of in Cairo but could not. The owner also wanted to sell us cannabis but we refuged! We would have refuged the horse ride too but he insisted his horse did not eat for days. Well, look at the poor animal’s rib cage.

Hibiscus juice served at almost every other dine in joints in Egypt. The cold elixir is a beautiful drink, served cold, that heals the heat struck soul of a weary traveler!

The hanging mosque of Luxor. The mosque compound share its wall with one of the ancient temples of Egypt. Call of prayer echo in its halls as well!

From the walls of Luxor temple! Hyroglifics script written and protected from days! The Anubis ( the character with the mask of a fox) is basically death of God. In ancient Egypt, those who used to mummify would actuallyput on the mask of Anubis as the procedure started!

The mighty Karnak temples and its ancient pillar that are found in Luxor, the destination in Egypt soon to eclipse Cairo!

The pillared halls of Karnak temple at Luxor gets beautifully lit up after sun down.

The valley of Queen at Luxor. It is okay if you get templed-out in Luxor but keep you eyes open for an astounding show of ancient artefacts around the area, especially at the valley of the kings and the queen and the ancient necropolis!

While visiting the valley of the queen, do look out for the caves where ancient Christian took refuge after they were persecuted! Your guide should see you from a distance.

Also read: Photo blog on Sikkim– the small state tucked away in the Himalayan wilderness!

Romancing the Nile river on a Dhow Boat! The Show Boats were basically used in the course of Nile river for transport, trade and agriculture since ages. The infamous slave trades of Africa had many rales associated with the Show boats .

Today, dhow boat stand as a viable and cheaper alternative to a full fledged Nile cruise. We hopped onto the boat and set sail during golden hour as the boat followed mellow river breeze!

Two Egyptian boys row their skate board boat (or what is it?) with their hands and cross the mighty Nile! Is this even possible? I wonder even after I had seen and captured this for real!

Dolma, made with potol (parwal, pointed gourd)! I knew Dolma is an Arabic dish but I was pleasantly surprised when Dolma came as accompaniment while we were busy eating some falafel at a ramshackle restaurant at the old market of Luxor! There were many vegetables but that submerged Potol stole and been stealing my heart ever since I clicked this picture!

lake Naseer, the enormous dam built on the river Nile at Aswan as viewed from Abu Simbel. Nile being the blood supply of a substantial landmass at the horn of Africa has been subjected to heavy political discourse and related action in the region. A drying source of this ancient and great river has prompted authorities to build dams and take actions to protect their territory and agriculture, stating forward a direct threat to regional political understanding. Aswan dam has long been critiqued as a short stint political move but only time will tell how that will unfurl!

One of the two enormous rock cut temples of Abu Simbel. The entire structure was under direct threat to be inundated with flooding water once the Nile dam had been completed! US extended research and technology to Egyptian scientists to design and move the entire structure as is at a risen position, immune from the possibility of a sudden inflow of gushing water! Today, the temples stand in all their glory, facing the sun and safeguarding thousand years’ secret tales!

Inside Aby Simbel temple. The towering statues stand in alert throughout era, protecting the upper kingdom of Egypt!

At the temple of Hatshepsut, the female ruler who wore a beard and ruled ancient Egypt as a Pharaoh. Her regime was a unique one, and enamored with the rise of a single woman resisting mounting patriarchy prevalent in those times. The kings that followed her regime tried hard to erase her legacy and history but rumors and aw remains through millenia!

The dense forest of pillars found in Luxor at the Karnak temple is one of the best examples of how advanced ancient Egyptians were when it comes to engineering and architectural designs! be prepared to visit there in all your flowing gowns and click one of the most memorable candid travel shots!

I pictured this at a museum at Coptic Cairo. The Dog faced saints intrigued me to no extent! There are many interesting facets regarding Orthodox Christian practices. I learnt a lot about this while traveling in Ethiopia but the first glimpse of that was observed in Egypt!