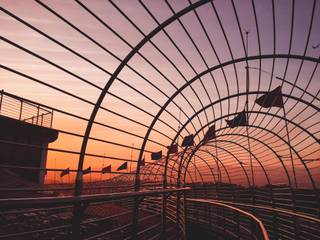 Chasing the Scotland of the East: Shillong-Cherrapunji-Mawsynram tour for a week!

We descended from the steeps of Bomdila,   Himalayas rather quick and entered into the warm embrace of the Khasi Jaintia hillside in a day, fourteen hours of road-trip to be precise! Verdant landscapes and still bodied Umiam quickly formed a layer on our memory, which was overwhelmed in the awe of snowcapped mountains and frolicking Jia Bharali from Arunachal Pradesh! Countless steel bridges helped us surpass the expanse from two distant states of North East India, one bordering with China, other with Bangladesh!

Enroute Shillong from Guwahati, Bramhaputra made a stunning appearance with a spectacular sunset. The roadside Assamese Dhabas filled us up with sumptuous thali meal, beaming with the goodness of winter vegetables, carp fish and Posto (poppy seed). All food items are cooked in mustard oil in the region!

Meghalaya can easily boast of excellent road connectivity in the entire North East India, barring the plainland of Assam, formed with Bramhaputra’s grace! It is only 3 hours drive from Guwahati to Shillong. We also had an option to fly in with helicopter services but chose to extend the road trip from Arunachal Pradesh instead. The hairpin bends seemed to go smoother as we entered Shillong.

The New Year Eve at Shillong!

An essay on Shillong can never be written without mentioning her spirit of festivity! The Christmas Eve and New Years the time of celebration! We arrived during the eve of New Year. The city decked up in pretty neon colored dim lights. The roof, oops.. sloping terrace of the old colonial massive structures reminded of the British days bygone.

Meghalaya’s capital Shillong was to be home for the next seven days. Nestled in the far eastern hills of the country, Meghalaya has an early schedule for sunset. It was pitch black dark at 5:30 pm! The famed Barapani, Umiam Lake did not make the striking appearance as it does to everyone arriving Shillong in daylight. It mattered in the long run. From the profound mountains and nothingness of Tawang, we fell directly into a sea of men swarming in the suffocating crowd of Police Bazar. Shillong was definitely not a case of love at first sight!

The Matriarchs of Meghalaya!

We stopped a few times for Chai. India runs on Chai. Sayantan needs a cuppa to make do with his travel stress, and do away with a quiet but certain slumber depending on the body! The shops or roadside dhabas are run by women in Meghalaya. Soon after, we learnt about Meghalaya’s iconic matriarchal society which refuges to confine to the regular patriarchal rituals of mainland India.

Men come and live in the women’s house after and marriage and deal with the in-laws in the process too! His children shall go by the wife’s name and his youngest daughter shall inherit the family house, along with property! We learnt from the taxi driver whom we had hired for a day and who happened to share Bengali origin, how he is ready to move into his wife’s house. B “That is the rule of the land!” Will his mother agree? He laughed. Patriarchy is never only promoted by men of the world!

I found a pair of tiny and inquisitive almond eyes looking at me from the cover of a red and black checkered Dhara, a traditional attire Khasi women tie on the shoulder. The baby observed me for quite some time as his mother was busy selling the bamboo shoot pickle to tourist buses.

One of the best books on North East India is Is That Even a Country Sir? by Anil Yadav. Basically, this is the book that intrigued me to take this trip! Read here in English and Hindi!

In this part of the world, bamboo is the single most helpful lifestyle product, predominantly used from meal to furniture to making numerous sturdy bridges that support the spiralling mountain streams, helping the indigenous method of staying connected in the extreme geographical areas. Bamboo made chairs will lift you from the deep of a mountain foothill in case of a medical emergency too!

The Police Bazar at Shillong: a W of Economy?

On approaching the Police Bazar area (the hotel Center Point), we fell prey to the wrath of office leaving homecoming crowd. The mess is unprecedented, and I say that after walking the Purani Dilli streets and surviving Panagarh Traffic of West Bengal! It took us about a couple of hours to reach the hotel and crash on the bed! I do not recall how we regained energy to walk out of the room, walk across the street and eat the legendary pork dishes of Meghalaya. But we did!

Shillong is the place where Rabindranath’s experimental romantic novel, Sesher Kobita (the last poem), was staged. RNT must have found his own “saloon compartment” amidst the romance blossoming in the Nil Mohor trees ( bloom of Shillong in winter) dotting Lady Hyderi Park.

I was hoping to soak my soul in the lingering romance of the sprawling valleys, golf course, the dense crowd pine and rhododendron trees. Shillong laughed and put me directly into the brawl of Police Bazar’s chaos!

I put a kwai, a portion of betel nut in my mouth and take refuge to one of the quaint little cafes before plunging back into the urban madness! The Kwai, a tamboul sold in abundance in the entire northeast and spit in blood red is a welcome home sign in the region!

Besides sniggering at the family room, women in Meghalaya are extremely beautiful and appear with delectable fashion sense! From the high boots and LBDs to flowing bridal gowns in lavender and peach, they define grace and beauty effortlessly! Same happens when a lady with cherry red lipstick on her lips scolded a rude cabbie for charging us more than the meter! “Wow”, I gaped!

There are lanes so narrow at police bazar that hardly one human can pass. By those lanes, housed are the tiny tourist hotels where the bulk of group tour people are lodged. Most of them are Bengali. They need there Rice and Daal and fish. The restaurants are in place serving fish curry in a typical Hindu hotel style! Stone’s throw away, you get freshly grilled chicken legs, fresh Mosambi juice, country liquor and a taxi stand. These taxis will guide you home!

The Tiny Taxis of Shillong, which you are likely hire for your day trip!

If not Bombay, where else you shall find those cute little Maruti 800 cars turned into black and yellow taxi? They brave the uneven mountain roads and run at a bullet speed to take the day trippers to Sohra (local name for Cherrapunji, where record rainfall happens), Dawki- the border area with Bangladesh and Umngot river, the “cleanest village” Mawlinglong and more!

The Music of the Khasi Jaintia Hills!

Mountains are falling prey to humans in Meghalaya, at an alarming rate. They are the personal property of the tribesmen and cut open, made into stones and sold at open market. “Will that not impact the environment?” I ask a local. He smiles and shows me the stage where NH7 was staged!

He deviates, “Shillong is the rock capital of India!” While that is omnipresent by the music played by the cabbies, it is hard to believe the age-old celebrated relationship with nature is being destroyed by people from the same community who also holds high respect for consecrated forests in the highlands.

Half an hour’s drive from downtown Shillong and you are brought out to the open of nature! It was the end of winter. Meghalaya stopped the incessant rainshower for a while. Mountain streams were docile. The highlands that earned Meghalaya the name as Scotland of the East were yellow ochre in , void of water! Jhum cultivation, a procedure to burn the land after each cycle of the crop has taken a heavy toll on the fertility of the region.

Finding Jesus Christ in the Hills of Meghalaya!

Just when you thought you have drifted far away from the world and its tiring cacophony and can find your “own self”, you will be greeted with a grin from the Khasi children of the nearby villages! I wonder in my mind, how rich they are, having an unbound horizon to play under! Villages dot the sparse vegetation, atop the mountain or at the foothill. Crystal clear mountain streams provide for water. Electricity has reached here. Before that, Western education came hand in hand with the Christian missionaries.

The British failed to conquer the distant parts of Khasi Jaintia hills, the heartland of many tribes with a weapon. But Jesus Christ did! With a book of Bible, came many missionaries since the beginning of the early eighteenth century.

Surprising it may be, Khasis welcome the Christian teachings and inculcated many intricacies of Pagan culture into it! Along with the mountain and river deities, Christ made a profound impact on the way the Khasis started to worship and document their history and culture.

Legend says a preluding deluge had stripped them off the sacred Khasi script. Today, the dominant religion of the Indian state of Meghalaya is Christianity! The Don Bosco Museum Shillong stand witness to the course of time and showcase how Khasis retained their indigenous identity and yet became the follower of a foreign faith!

Khasis belong to an official ethnic minority group. The Khasi Hills Autonomous District Council regulated their laws, taxation is slightly lower than elsewhere in India, land is set aside for specific use in tribal zones, and a quota system is in place for higher education and civil service jobs.

The trucks here bear the name of Jesus Christ. I live in the Indian peninsula. Infant Jesus happily shares truck in the part of the country with Sti Krishna, Satnam Guruji or Allah Rakha.

However, the  Trucks are predominantly Jesus’s . The Christian missionaries had called this pretty place with lakes and lush green carpeted hills as “Scotland of the East!” Down south, you have Sylhet of Bangladesh, whose Jaflong border finds many mentions of Humayun Ahmed’s books. However, the Umngot river is crystal clear within border. In Bangladesh, she becomes a muddy torrent.

Is Shillong truly the Scotland of the East?

Shillong will make you work hard if you are hard pressed on finding the remnants of Scotish days. It is the customs and culture of the indigenous people that intrigued me the most and not the Scottish nostalgia! A meal with bamboo shoot and pork blood soon punctuated by a glance at the local markets selling chunks of farm-bred pork to the fine jacquard fabric of many tribes, Shillong offered a plethora of human heritage!

Shillong dims out in comparison to other wonders of North East India, say Manas National Park or Majuli or Kaziranga and Arunachal, of course! But it is the people of Shillong who will make your trip worth remembering!

The city is one of the largest in this region and houses 1.5 Lakh people. The crumbling heritage, very much like that of old Delhi or North Kolkata, is prominent on the streets. A walk on the streets of Shillong is pretty rewarding if you have the eye to find history’s gnaw!